How To Buy Pearls

Fine pearls are one of the least understood and most niche gemstones in the jewelry world – even professional jewelers often run into trouble identifying pearl types, understanding grading scales and pearl value.

It’s not surprising then that there are a number of questions that need to be answered before taking the plunge and investing hundreds or even thousands of dollars into a fine pearl necklace or pair of pearl earrings.

You probably already have an idea of what kind of jewelry you want to buy (i.e. pearl necklace, earrings, full set, etc.), so let’s focus on how to choose the right pearl type first before looping back into jewelry designs, budgetary issues and finally, selecting the right vendor where to buy pearls.

So, you’ve decided that you’d like to buy a fine pearl necklace (or a pair of earrings), but now you’re stuck: what kind of pearl necklace should you buy??

There are 4 main pearl types to choose from:

Each one of these has its own unique beauty, size ranges, pearl color and budget parameters.

Let’s deal with the most frequently asked question first as it deals with the two most popular (and easily confused!) white pearl types.

Should you buy Akoya pearls or Freshwater pearls? 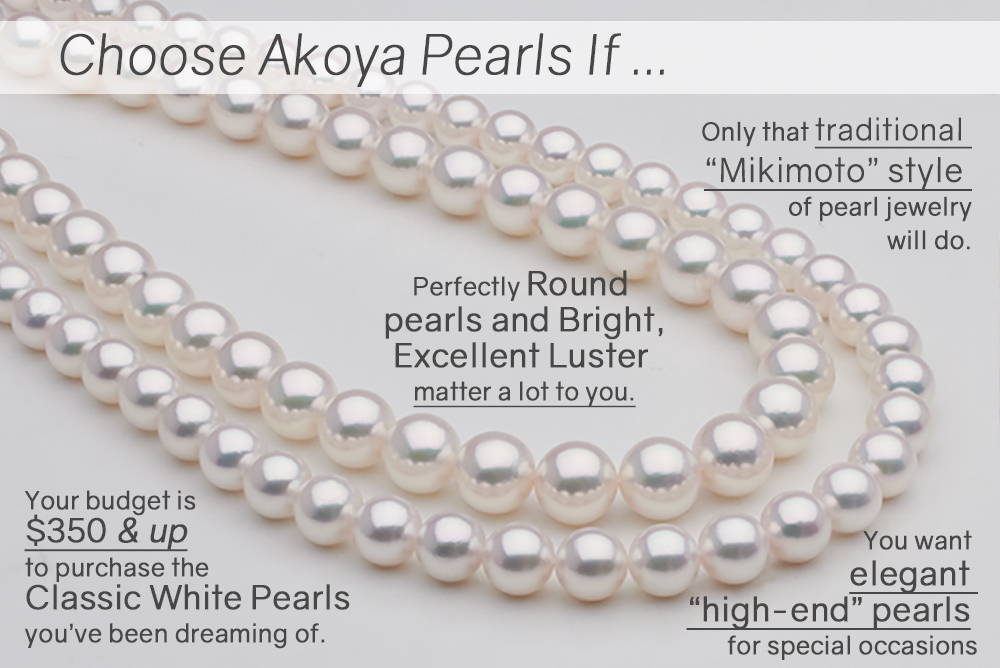 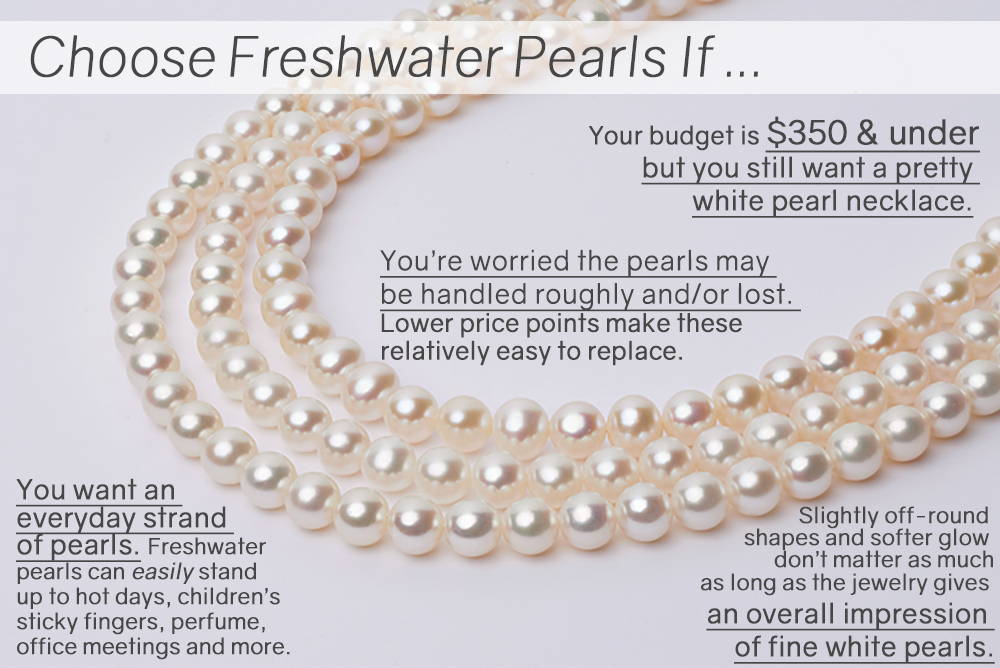 For a more in depth discussion about choosing between saltwater Akoya or Freshwater pearls, read this expert article:

As mentioned earlier, the other main pearl types are black Tahitian pearls, and White or Golden South Sea Pearls – what I call our “Exotic Pearls”. Each variety is wonderfully distinctive, with its own traditional pearl colors, size ranges and unique beauty.

Use the tabbed section to read more about these beautiful pearls: 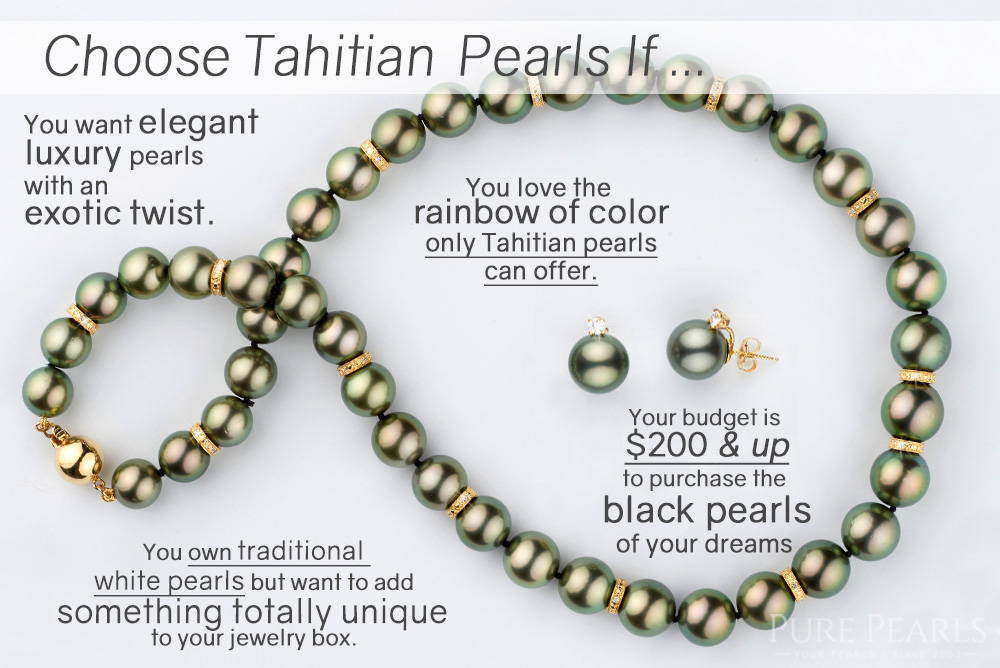 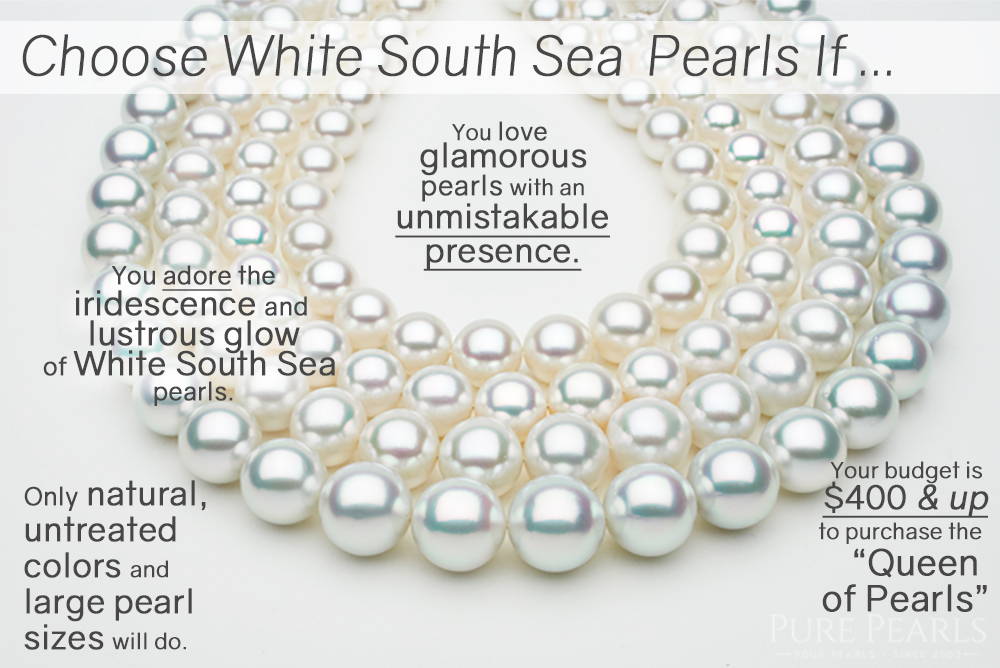 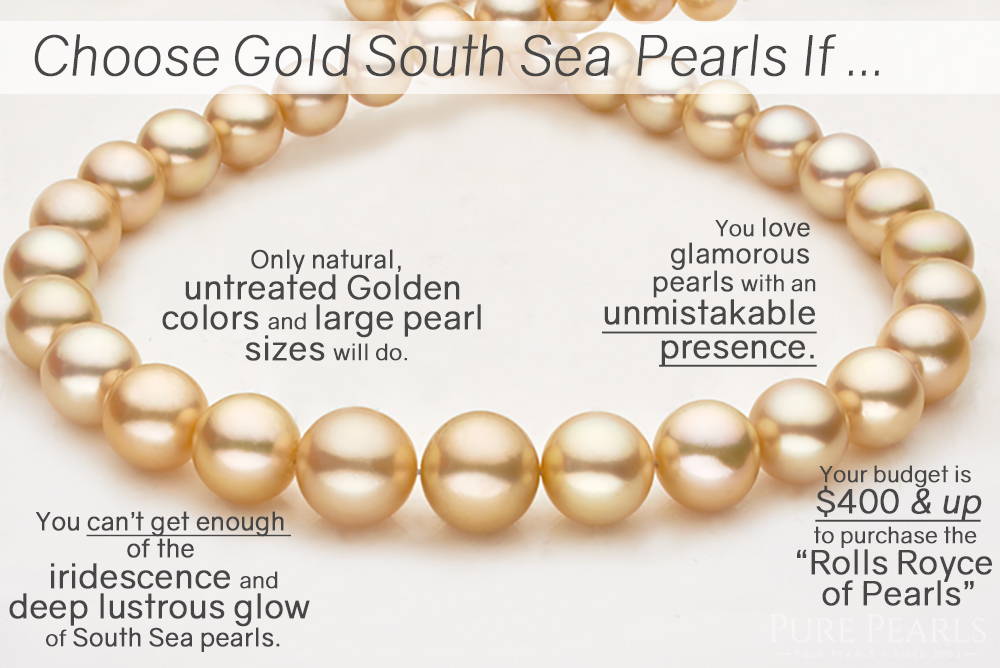 To learn more about each pearl type read this article:

Pure Pearls offers TONS of advice and real-life pictures of our pearls actually being worn on models so you know how your pearls are going to “measure up” when they arrive.

Generally the most popular sizes are within the 7.0-9.5mm range, which are considered the most traditional and versatile pearl sizes to buy.

The larger the pearls get (all other attributes like Luster, Shape, and Surface Quality being equal), the more valuable they are. 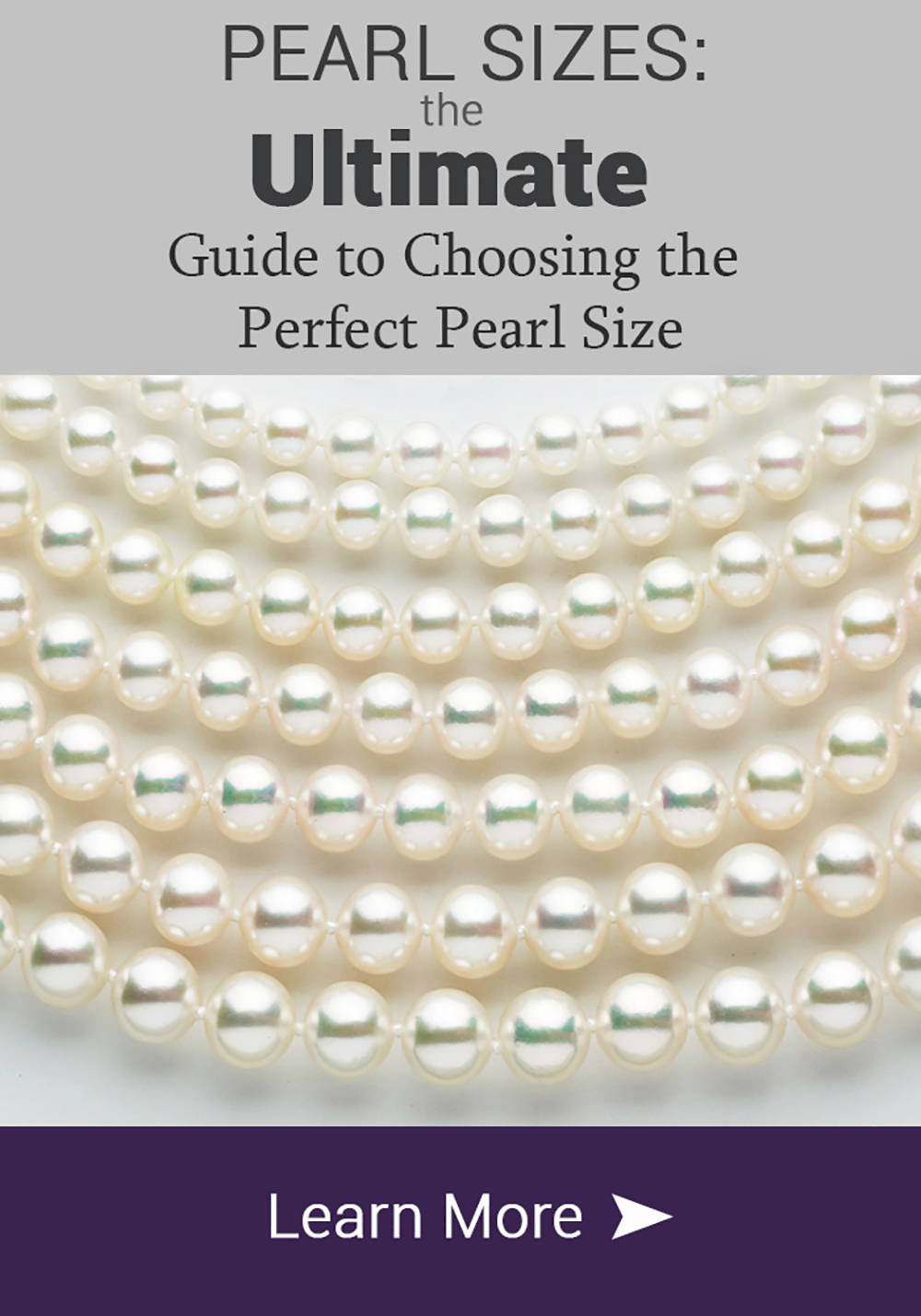 Inside you’ll find a complete range of traditional pearl necklace and earring sizes modeled for you so you know what to expect, a “Pearl Sizes in Real Life” printable PDF you can keep, and a complete breakdown of each pearl type’s size ranges from Akoya to South Sea pearls.

DEFINITELY visit:  Pure Pearls Ultimate Guide to Necklace Lengths  to learn everything you could ever need to know about pearl necklaces – from the timeless classics to more modern styles!

Pro-Tip: The most popular and versatile pearl necklace length is called the 18-Inch “Princess Length” pearl necklace.  This is considered the “Modern Classic” length, and should come to rest about 1.5 to 2.0-inches below the hollow of the throat – suitable for a wide variety of necklines and outfits. 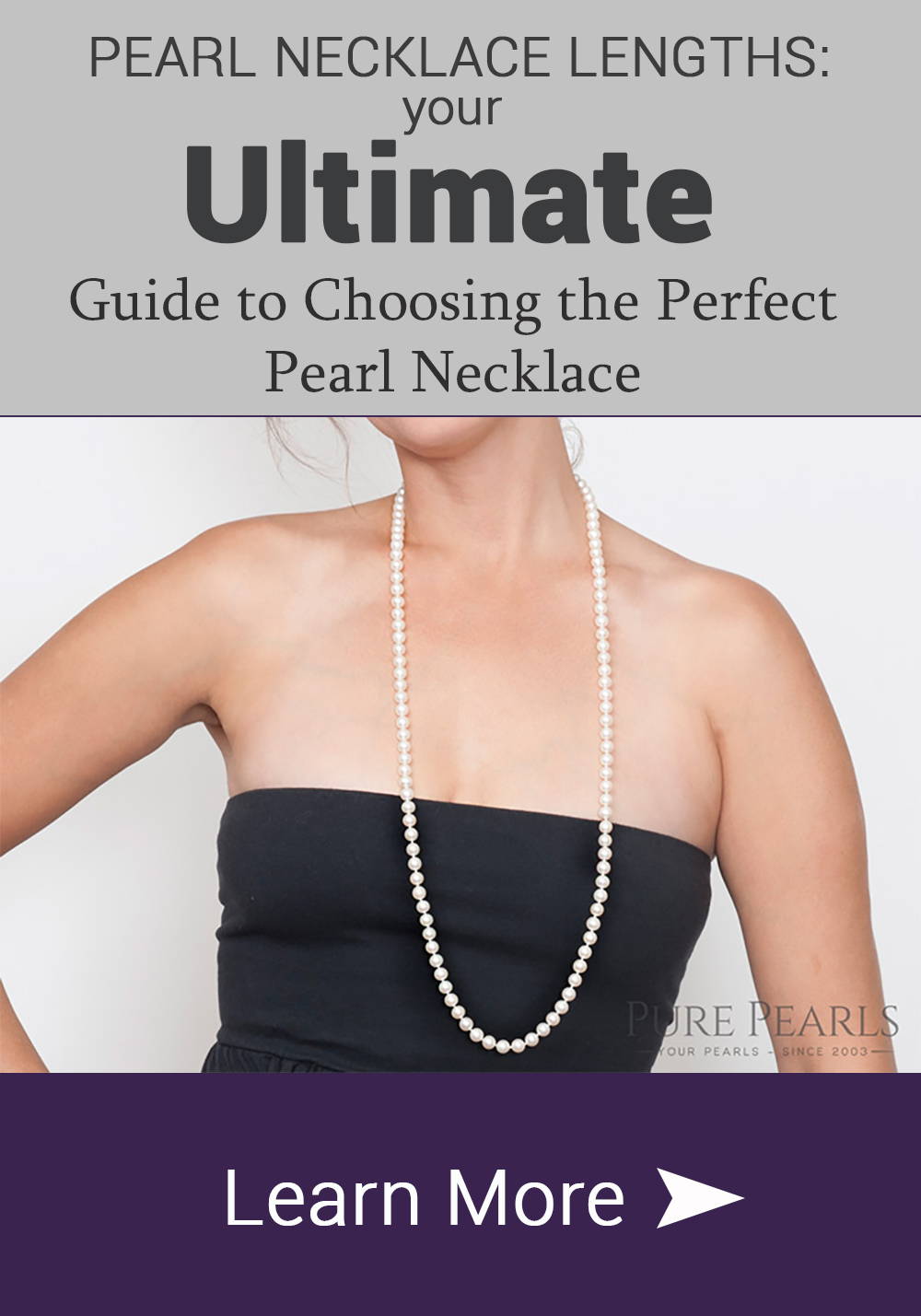 For fine cultured pearl jewelry, you should set a baseline of $100 or so for even the smaller-sized Akoya pearl stud earrings mounted in 14K Gold, and the same can be said of fine Freshwater pearls. 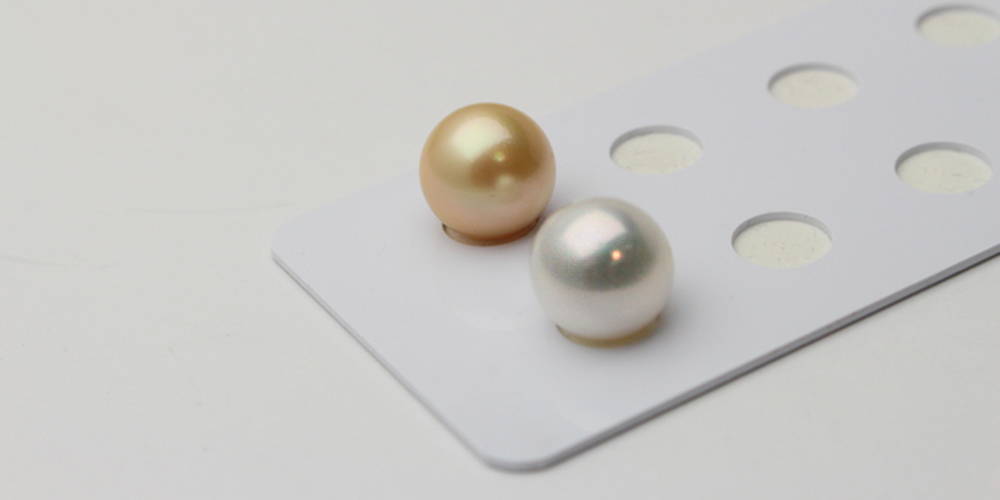 Each pearl type has its own pricing tiers, and much like diamonds, you can expect prices to increase exponentially with every millimeter size increase. The price difference between a 7.0-7.5mm Akoya pearl necklace, and a 9.0-9.5mm size is quite large.

A good rule of thumb is to expect a 30-50% increase in price with each millimeter size up you go.

This pricing issue is due to a variety of factors, with  rarity  chief among them.

Larger pearls require much more time acquiring thicker nacre layers in the host oyster, and the amount of risk, time and labor that goes into culturing a single 15.0mm fine quality South Sea pearl (for example) is quite a lot ...

Use the tabbed section below to see the pricing ranges for each pearl type and jewelry style: 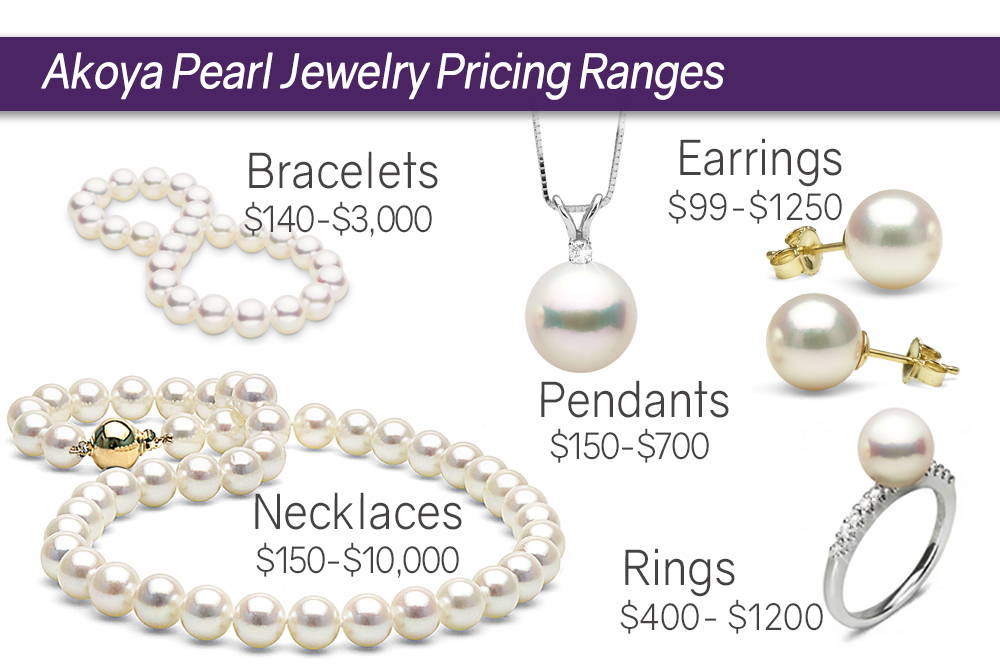 Japanese saltwater Akoya pearls are a mid to high-range pearl type. Expect to spend anywhere from $99 for small stud earrings up to the high thousands for the largest and rarest size necklaces. 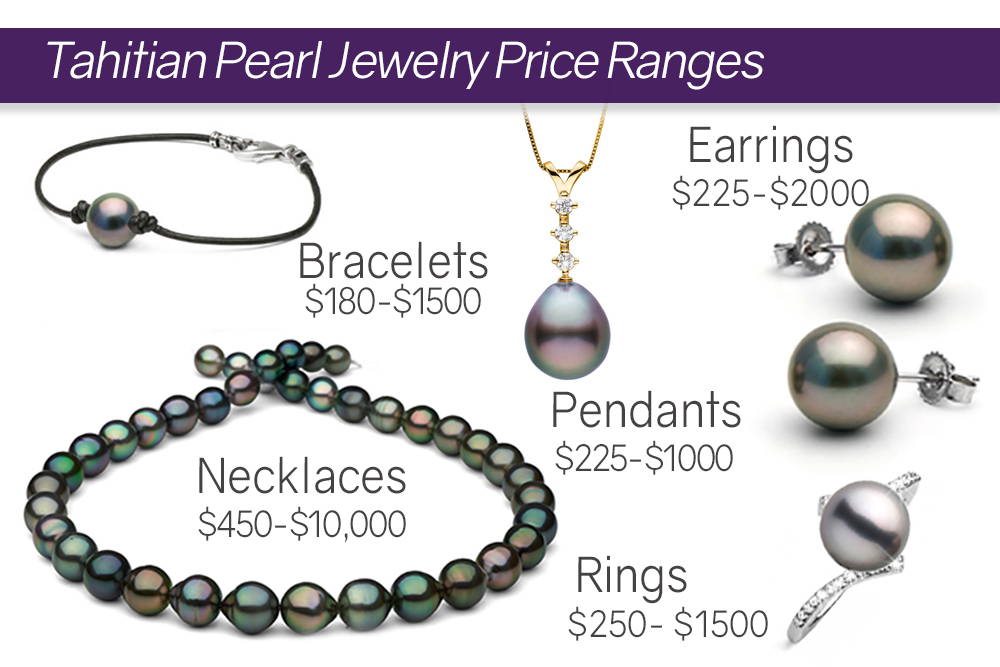 Black Tahitian pearls are the famous naturally-black pearls from French Polynesia. These stunning pearls range from the mid-hundreds to tens of thousands of dollars. 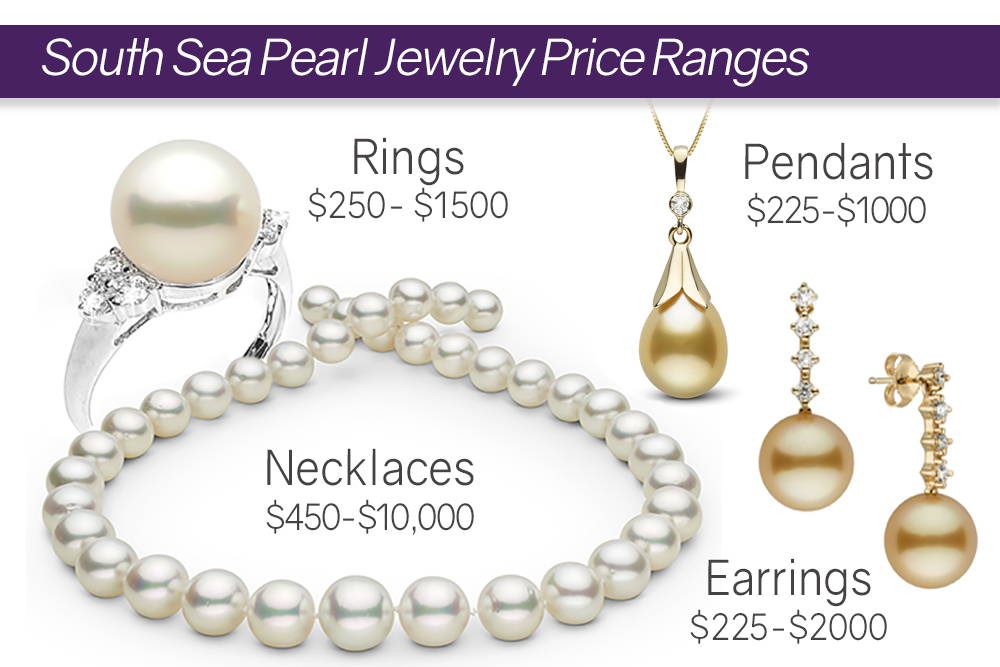 South Sea pearls are considered a “luxury pearl type”, and so generally range from the mid-hundreds for fine earrings, to tens of thousands for very high-end, perfectly round pearl necklaces. 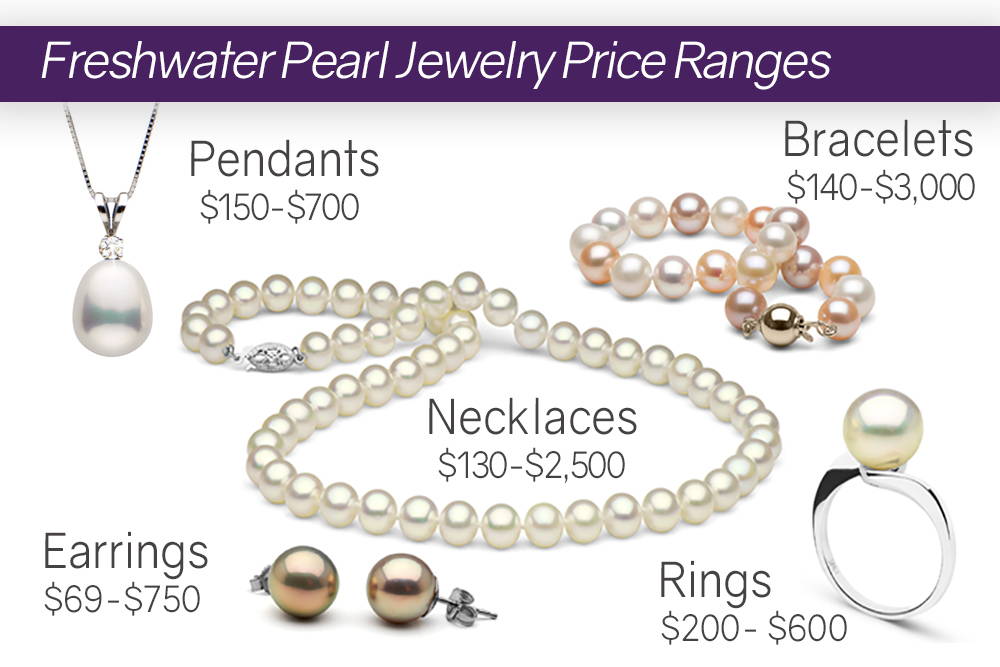 Freshwater pearls are very budget friendly, with low to mid-range pricing tiers from just a few dollars to the low thousands for the very largest and finest styles.

STEP 5: Pearl Grading and Pearl Value Factors (there’s 7 of them) 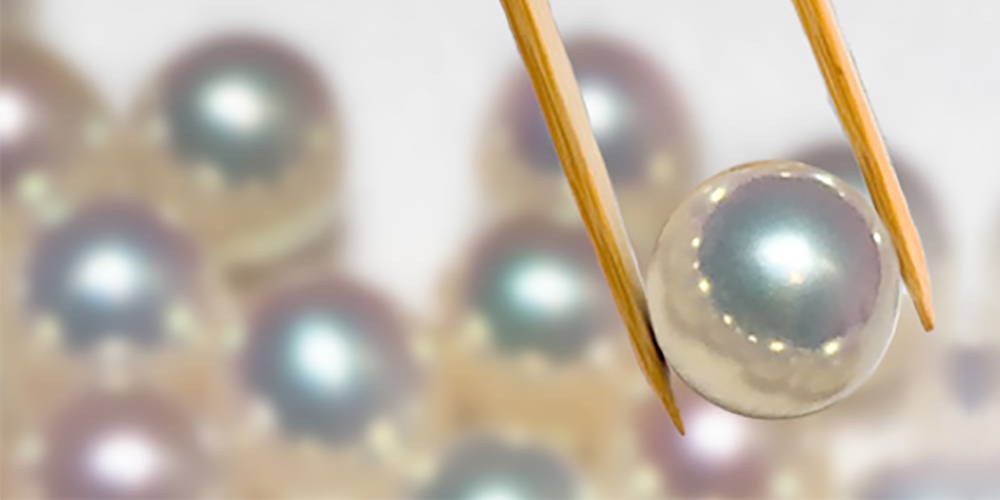 Understanding these points is  CRUCIAL.

The main pearl grading factors are:

To this date, there’s still no set, internationally agreed-upon grading scale for pearls. That means that pearl grading is subjective, depending on the seller you’re dealing with.

PurePearls.com uses the A-AAA Grading Scale, which is a simple and straight forward grading system based upon specific percentages for attributes like surface blemishing, luster rating (the sharpness of reflections), color/overtone and shape, among others. The A-AAA scale is used most commonly with Akoya and Freshwater pearls, but also converts easily from the Tahitian and South Sea grading scales.

If you don’t want to end up with an over-priced strand of pearls (or pearls that have heavy blemishing or a chalky appearance), then it’s important to understand what each pearl type should look like, and what benchmarks it needs to meet on the A-AAA Grading Scale.

If you see a strange grade like AAAA+, then buyer beware.

For an in-depth understanding on each pearl’s grading scales read: The Insider’s Guide to Pearl Grading 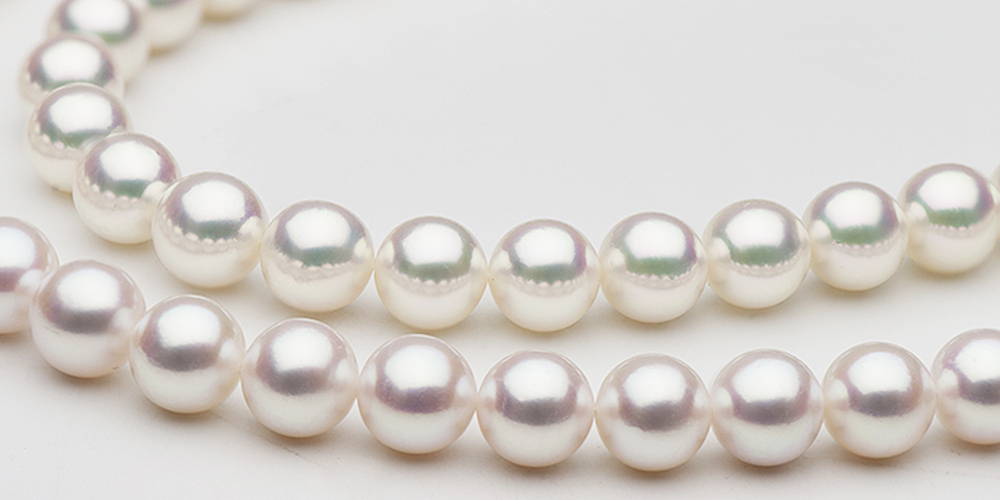 The deeper and more intense the luster is, the more valuable the pearl. Look for pearls that display reflected light sources as crisp, clean and delineated, with only slight blurring around the edges.

You should also be able to recognize some of your facial features reflected in the surface of the pearl. AAA quality pearls feature the best luster, AA+ quality pearls should have Very High luster and so on.

Fine pearl jewelry is a gift that’s meant to touch the heart. The vast majority of the time, these gems are going to be a very special surprise for a birthday, anniversary, graduation or Holiday event.

Because this purchase is such a special one, there are a few considerations to take into account before settling on a vendor to purchase from. A few Dos and Don’ts to remember before taking the plunge: 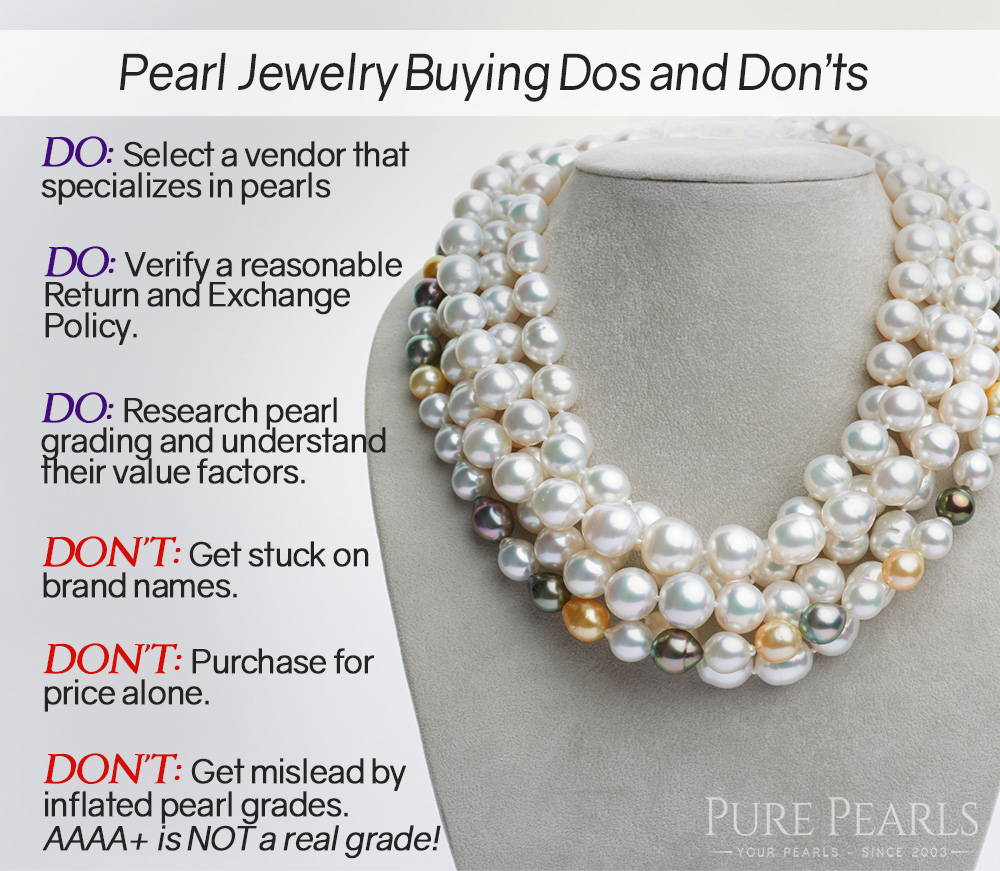 Choosing the right vendor should balance pearl selection, quality, price and above all, excellent Customer Service.

While Mikimoto definitely does carry beautiful quality pearls, doing a little bit of homework can save you THOUSANDS by avoiding the high premiums charged by luxury brands without sacrificing quality.

On the flip side, shopping by price alone without knowing what you’re buying (or whom you’re buying it from!) is a one-way ticket to frustration. Taking the plunge on an anonymous overseas vendor could net you a strand of potato pearls for way more than they’re worth and no way to return them. 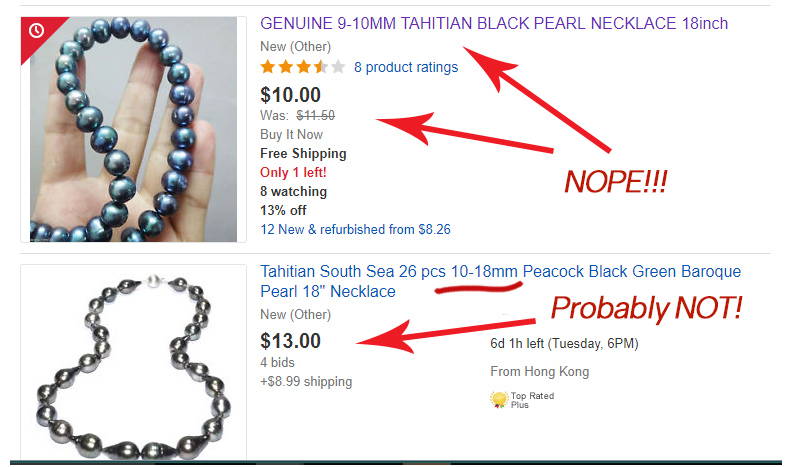 Case in point: I found these on the FIRST page of a popular auction site, total search time: 1 min. The top strand is DEFINITELY not worth even $10.00!

Consider whether you want your pearls plucked off some warehouse shelf, or tailored to your preferences, with all the care that entails. 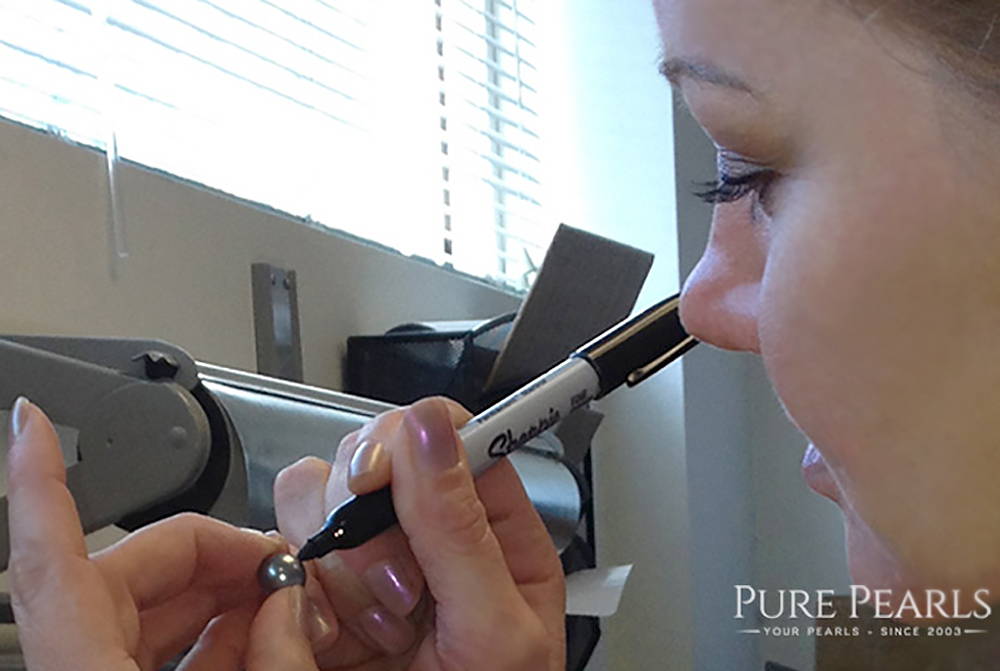 Hi there! That’s me: Ashley McNamara, CEO of PurePearls.com. I’ve specialized in pearls for nearly 15 years.

Pure Pearls makes all of our fine pearl jewelry by hand, to order here in our Los Angeles workshop.

We hand-select and match all pearls for size, color, overtone, luster and surface quality (there’s those Value Factors again!).

Other advantages to choosing PurePearls.com are:

Now that you’ve read a bit about the most popular pearl sizes and selecting the perfect necklace length (and what you can expect to spend), it’s time to start shopping around for pearl jewelry!

Whether you’re trying to decide on the perfect pearl necklace, or a classic pair of studs (or something even more glamorous like Tahitian or South Sea Pearls, we’ve got you covered.

I hope this short article was helpful in illuminating the ins and outs of buying cultured pearls online today. If you have any questions, always feel free to email us – we are ALWAYS happy to help out!

Now my new Pearl Ninjas: go forth, and Buy Some Beautiful Pearls!